The qt_motor is the main software interface for QTrobot actuators. Its implementation follows ros_control paradigm and provides standard ROS interfaces for joint command, joint state, joint trajectory and etc. Beside supporting the relevant standard ros_controllers, qt_motor also implements other custom controllers such as QTGestureController and QTMotorsController via dedicated plugins. The following diagram depicts the architecture of QTrobot motor interfaces:

The qt_motor is running on QTRP during the startup of the robot. Similar to other QTrobot software interfaces, it is an standard ROS node. You can find its configuration files in the node default config path. (e.g. using $ roscd qt_motor/config). Below is a summary explanation of each of QTrobot motors configuration files:

QTrobot joints are group in three parts: head, right_arm and left_arm. The movement of each joints is limited in software and configured in qtrobot-hardware.yaml along with the applied calibration value using automated motor calibration procedure. Therefore, the value of the joint limits appear in the configuration file may be different from the actual value because they also take the calibration value of each motor into account. QTrobot motor control does not use ROS joint_limits_interface (although one can confgiure and enable it) because the joint limits are set in each motor embedded controller at the startup time. Here are the joint limit values of each joint:

Please notice that, the joint limit is different from collision control and this does not mean that the QTrobot has self collision awareness when moving its parts! The embedded controller of each motor ensure that each joint separately does not exceed the limit. However the overall generated trajectory may collide other robot's parts.

QTrobot uses standard ROS JointStateController and publishes motor feedbacks such as position, velocity and effort values on /qt_robot/joints/state. To access these values, you can simply subscribe to this topic. Here is an example of reading joints state values from command line:

To learn more about motors and reading feedback from code, you can follow our Python QTrobot motors tutorial.

QTrobot motors are grouped in different parts as it's described in joint configuration. To commands a motor in a joint space, you need to use the interface for the corresponding part which is of the following:

For example to move robot's HeadYaw joint to looks 45° degree to its left side, you can try the following command from terminal:

To learn more about commanding motors you can follow our Python QTrobot motors tutorial.

The QTGestureController plugin provides ROS interfaces to manage QTrobot body gestures such as listing, playing and recording gestures. QTrobot comes with some pre-recorded gestures, which are located and categorized in QTRP under ~/robot/data/gestures/ folder. However one can easily record a new gesture by simply activating and moving robot parts (head, right arm and left arm). You can play any gesture using one of the following methods:

For example, you can open a terminal (on QTPC) and try the following command to play the happy gesture

QTrobot gestures may contains all parts or can be recorded using only one part (e.g. head). However for the time being, you cannot play two gestures concurrently. The gesture controller does not accept other requests for playing new gesture when it is already busy playing another gesture!

What are QTrobot gesture files?​

The QTrobot gestures contain robots joints position's waypoints and their corresponding timestamps. The joint positions are recorded in 20Hrz and formatted in XML file (e.g. QT/bye.xml) with some other information such as duration of the gesture and the robot parts which are involved in playing the gesture. After recording, the gesture file can be manually post processed (if required), for example, to remove the trailing delay by simply delete the unnecessary waypoints from the file. Bellow is an example of QTrobot gesture file:

How to record a new gesture?​

Recoding a gesture is done by moving the robot parts by hands and store the joint positions. This involve the following generic procedures:

To record a gesture, you can use one of the following tools:

By default the qt_gesture.py script should be installed on QTRP under ~/robot/code/software/tools/qt_gesture_tool. Anyway, if you cannot find it, just simply update the software repo using git pull. For example to record a gesture using QTrobot's right arm, follow these steps:

Your gesture should be stored in ~/robot/data/gestures/mygesture.xml. You can play and test your gesture.

For generate and record safer and smoother gestures, please pay attention to the following tips carefully:

lightbulb When recording a gesture, never hit the robot parts to each other or to the QTrobot's body.

lightbulb Do not move the arms or head so fast and avoid sharp and shaky movements. Move it naturally and smoothly. Due to safety feature implemented in the gesture controller, the fast movement will be slow down automatically and you would not get a desired gesture.

lightbulb Do not move the robot head so fast up and down. This may apply excessive force to the neck motor joints when playing the gesture!

lightbulb It is always easier to record gestures using an assistant: one person to control the Tablet app/command line tool and the other person move the robot parts.

QTrobot parts can be controlled in cartesian space from example using MoveIT Motion Planning Framework. Generally, in cartesian space, you do not command each joints seperately, instead you ask robot to move its end efecctor (for example right hand) to a desired position in cartesian coordinate using X, Y and Z position with respect to a reference point. To do this you need some more knowledge and setup which are covered in the following sections.

The URDF (Universal Robot Description Format) model is a file or collection of files that describe a robot's physical description such as the motors mechanical position and orientation, the links between motors and etc. The URDF file can be used for visualization of the robot, calculating the inverse kinematics or motion planning in ROS. Following is a description and simple visualization of QTrobot's URDF: 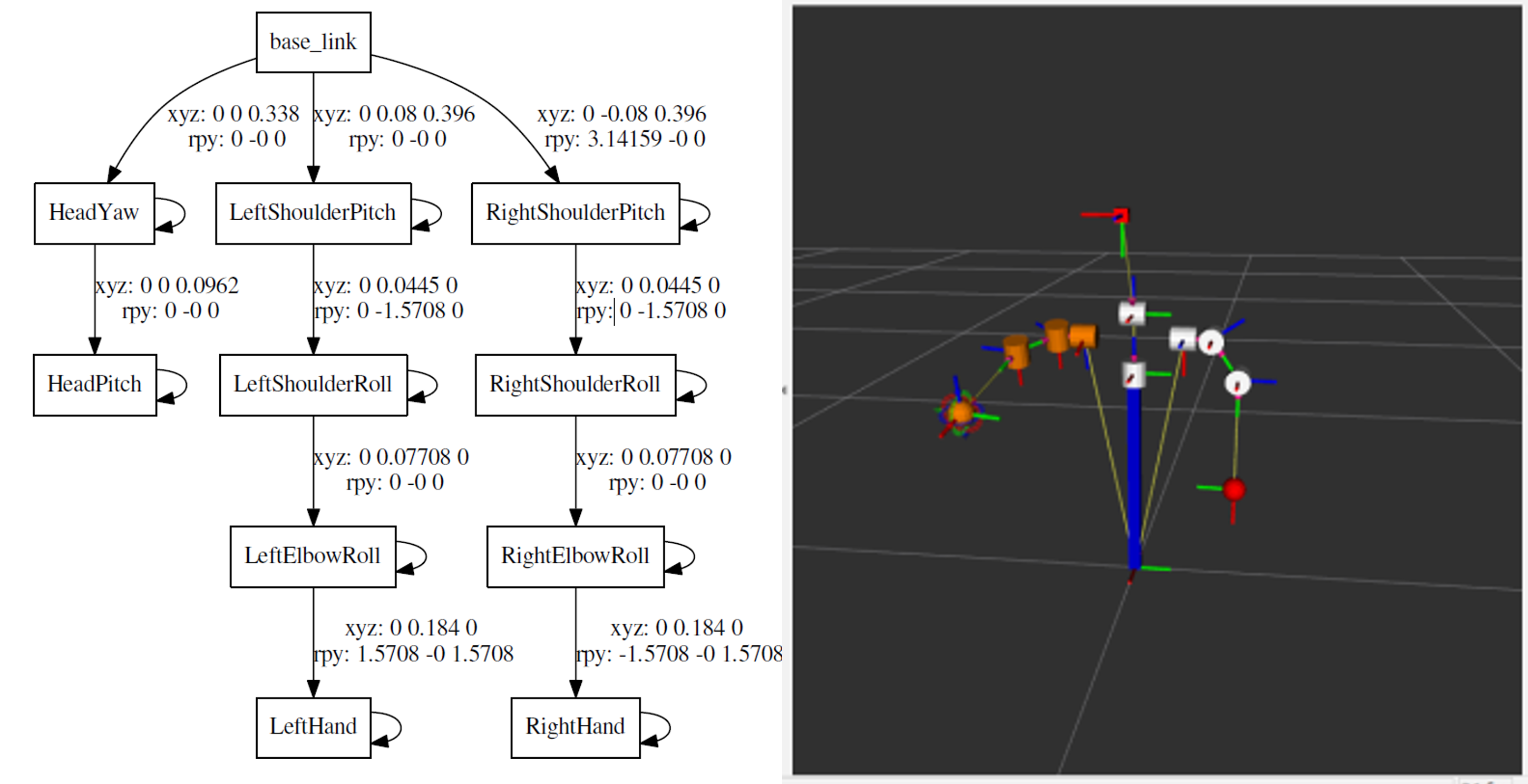 QTrobot provides two different setups (standard and advanced) which can be configured depending on the use cases and applications. The default setup is standard which provides the JointGroupPositionController to command motors using joint position commands. On the contrary the advanced setup is intended for applications which require more advanced motor controls using inverse kinematic, MoveIT Motion Planning Framework, JointTrajectoryController and etc. Bellow is a summary of the configuration of each setup:

For most of the human-robot-interaction applications, the standard setup should be more than enough unless you want to use inverse kinematic in your scenario similar to our QTrobot hand writing tutorial. In this case, to enable the advanced setup,

We have already created the inverse kinematic solver of QTrobot's left and right arm using IKFast Kinematics Solver. You can find these plugins in ~/robot/code/software folder on QTRP and QTPC or get them from QTrobot github software repository. Perhaps the easiest way to learn how to use the MoveIt framework wit QTrobot is to to follow our QTrobot hand writing tutorial. In this tutorial you will see :

Take a look at QTrobot hand writing demo in action: