QTrobot has an integrated High-performance digital microphones array in the head. It is a ReSpeaker Mic Array v2.0 board from SeedStudio with plenty of features such as voice activity detection, direction of arrival, beamforming and noise Suppression. This powerful microphone can be used in variety of scenarios such as voice interaction, interactive vision-voice applications, multichannel raw audio recording and processing and etc. It is connected to Raspberry Pi (QTRP) via USB port and it is open for developers to freely tune, configure and use it in standard ways.

Like any other standard microphones, the QTrobot Respeaker microphone is an standard Linux capture device which is managed by ALSA driver. Bellow you can see the output of arecord -l command which lists all capture devices in QTRP:

QTrobot comes with following pre-installed software for speech recognition, accessing raw raw microphone data and tuning tool. These software interfaces are installed on QTRP because direct access to the microphone device is required.

For the time being, most of these interface exclusively access the microphone. That means, for example, one should first stop qt_vosk_app, and run qt_respeaker_app if he/she needs to access raw microphone audio data using qt_respeaker_app.

Like many other ROS services, you can call /qt_robot/speech/recognize with the desired language and options. The options can be used to tell the service to stop and return the recognized words as soon one of the given options is detected.

Take a look at our Python offline speech recognition tutorial to learn how to call qt_vosk_app services from a Python code. Here is also a Python code snippet:

If your required language is not already installed on the robot, you can go through the following steps to add it to the qt_vosk_app:

The qt_gspeech_interface provides an online (required INTERNET connection) multilingual speech recognition ROS service based on Google Speech-To-Text API. The qt_gspeech_interface is not running by default and it cannot be run simultaneously with other voice apps such as qt_vosk_app. So to enable this service you need to first ensure that other voice apps and services are shut down. For example, to disable the qt_vosk_app, you can simply comment the corresponding line in ~/robot/autostart/autostart_screens.sh on QTRP and reboot the robot.

Please follow the setup instructions to setup your google account before enabling the qt_gspeech_interface. Then enable it in autostart script (~/robot/autostart/autostart_screens.sh) on QTRP and reboot the robot. Here are some guidelines:

and add this line below other scripts:

Similar to the offline version of speech recognition, the interface can be accessed using ROS Service /qt_robot/speech/recognize command line tools as shown bellow:

You can refer to the instruction given above for the offline version of the voice recognition to use the qt_gspeech_interface service in a Python code or using QTrobot visual studio blocks..

lightbulb The microphone is installed on top of the QTrobot's head. Therefore, it is always better to talk to QTrobot from above (higher than robot) the robot so that your voice can clearly reaches the microphone.

lightbulb For faster and more reactive speech recognition, provide proper options (if applicable) to the service call. For example, if you only need to recognize yes or no in a sentence, give these values as options so that the service immediately return one of these two values as soon being detected by engine.

lightbulb There is slightly delay (less than a second) from the moment you call the service until the recognition engine begin analyzing the voice. So either you start speaking with a small pause or you can take this into account when developing interactive scenario by adjusting the dialog follow in your application.

lightbulb In case of qt_vosk_app, there might be higher delay from the moment you switch the language at run-time until the engine loads the model and start analyzing the voice. This is related ONLY to the first call for switching the language.

The qt_respeaker_app provide ROS services for streaming multichannel microphone audio data, voice activity, voice direction and etc. Here is a list of the topics which are published by qt_respeaker_app:

When using VOD values, please not that 270 indicates to the front of QTrobot due to the microphone orientation in the robot's head.

This qt_respeaker_app service is not running by default and like other microphone-related interfaces should be exclusively used with the Respeaker microphone array. Therefore, it cannot be run simultaneously with other voice apps such as qt_vosk_app.To enable this service you need to first ensure that other voice apps and services are shut down. For example, to disable the qt_vosk_app, you can simply comment the corresponding line in ~/robot/autostart/autostart_screens.sh on QTRP and reboot the robot.

To use this service you need to enable qt_respeaker_app in autostart script (~/robot/autostart/autostart_screens.sh) on QTRP and reboot the robot. Here are some guidelines:

and add this line below other scripts:

For most of the cases the default parameters should just work fine for you. However, you may need to adjust some of these values such as AGCGAIN to have loader (more gain) in streamed audio or MIN_NS_SR and GAMMA_NS_SR to better eliminate background noises such as QTrobot internal fan's noise.

The qt_respeaker_app streams each microphone channel's data in seperate topics: /qt_respeaker_app/channel0 - 5. To record any or multiple of these channels, you can simply subscribes to the correspondig channels from QTPC (or any other computer in ROS network) and store the audio data in a WAV file or other audio formats. You can take a looke at audio_record.py examples to see how to record /qt_respeaker_app/channel0 in a .wav file. Here is also a simple code snippet:

The above code snippet records processed audio for ASR from channel 0 and save it in audio.wav file. You can later process or listen to it. By default some tuning parameters for noise reduction and automatic gain level are set in config/qt_respeaker_app.yaml. If, for example, you need to record audio with different gain level, you can simply change the AGCGAIN: 100.0 and reluach the qt_respeaker_app.

We have developed respeaker_mic_tuning graphical tools based on ReSpeaker USB 4 Mic Array tuning software to easier find and tune the Respeaker microphone parameters. Using the gui, you can tune the parameters at runtime and find the one that value which best fits your scenario such as different audio gain level or different background noise elimination. 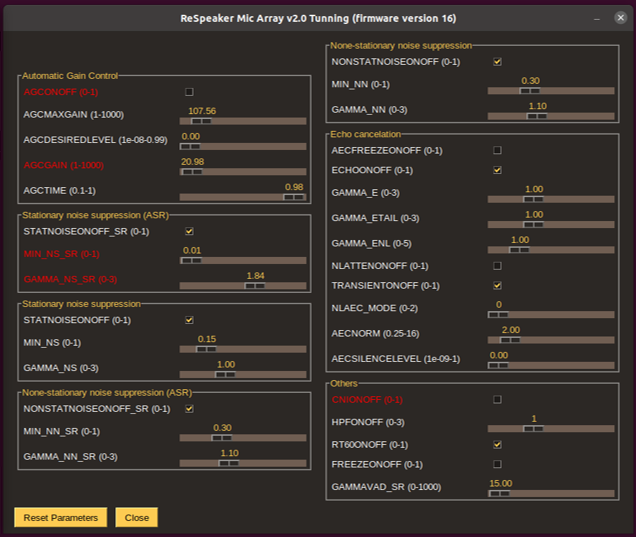 The tool is available in QTRP under ~/robot/code/software/tools/ folder. To run it:

What can I tune?​

You can find the best value and tune each Respeaker parameter depending on your need. You may need to learn and got some knowledge of audio signal processing to understand all these parameters. However, in most cases you simply need to adjust the following paramters of the Respeaker microphone:

What can I do with the tunned values?​

The respeaker_mic_tuning temporary adjusts the paramters of Respeaker microphone. However, values of these paramters will be reseted after rebooting the robot. therefore, when you find the currect values which fits your application scenario, you can use those values to confgiure the corresponding QTrobot interfaces. For example, by setting them in qt_respeaker_app.yaml for qt_respeaker_app or use them to configure within your own code. here is simple code snippet to set Respeaker's paramters via a Python code:

You can take a look at our qt_vosk_app_node.py as a reference code.