This document guides you towards quick start coding on the QTrobot using programming languages. If you are looking for graphical programming, please take a look at Quick start with QTrobot studio.

QTrobot is a high-end research platform with powerful computers and state-of-the-art hardware such as 3D camera and far-field microphone array. It comes with two computers: i) QTRP, a Raspberry Pi based computer to control the main hardware and ii) QTPC, an Intel® NUC i5/i7 PC to provide more computational power and to accelerate software development cycle. Both computers run on Ubuntu/Debian Linux operating systems and leverage ROS to offer easy-to-use yet very flexible software architecture. QTrobot's hardware is easily extendable via USB-C and USB adaptors, for example, to connect external monitor, keyboard and mouse. QTrobot also provides a rich set of APIs for several programing languages such as C++, Python and JavaScript. 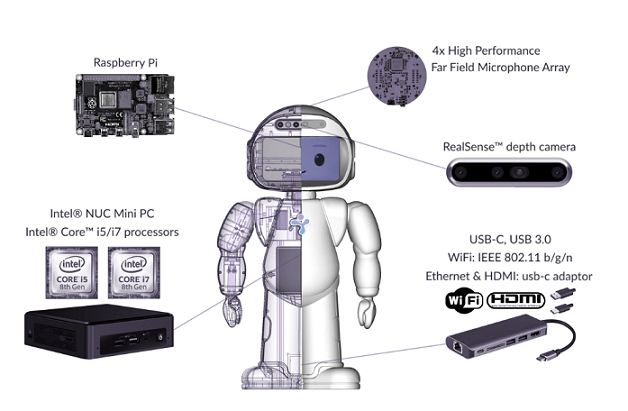 As it is shown in the following diagram, QTrobot consists of two computers, one in the QTrobot head (QTRP) and the other in the body (QTPC), which are internally connected via ethernet cable. All of the QTrobot devices such as display, speakers, microphone and motors are connected to QTRP except the 3D Camera which is connected directly to QTPC. The Wi-Fi of the QTRP is used to create the QTrobot hotspot with the same SSID as the robot’s serial number (e.g. QTRD000101).

Both computers are configured to interact in one ROS environment. Upon starting the QTrobot, QTRP runs the roscore and initializes the ROS environment. It also turn on QTPC via wake-on-lan when the ROS environment is up. You will also find two USB port at the back of the QTrobot. One of the is attached to QTRP and the second one (USB-C) is connected to QTPC. This USB-C port can be used to connect keyboard,mouse and monitor via a USB-C extension hub to QTPC.

QTPC is already configured to work with roscore which is running on QTRP and you can access all QTrobot ROS services ands topics.

There are few ways of developing code for QTrobot. We strongly recommend you to start developing directly on QTrobot's integrated QTPC. As it is shown in the following picture, you need to prepare:

keyboard a keyboard,
mouse a mouse,
desktop_windows and a monitor with HDMI cable. 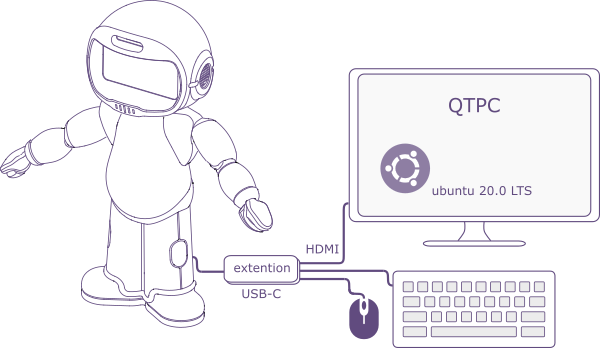 To power the QTrobot on, simply connect the QTrobot's power supply1.This triggers the power on process and your QTrobot becomes ready less than a minute. After powering on, you can see the QTrobot face is on and the motors are in their home position. If the QTrobot is already connected to the power supply simply push the power button to turn on the QTrobot.

Connect keyboard, mouse and HDMI Monitor to your USB-C extension then plug it in the USB-C port at the back of QTrobot.

Step 3. Wait for QTPC to boot​

After you turned on your QTrobot it will need some time until your QTPC turns on, because QTRP will turn on QTPC after ROS environment is up. You will see the Ubuntu desktop of QTPC and you can use in the same way you use a standard desktop for development. 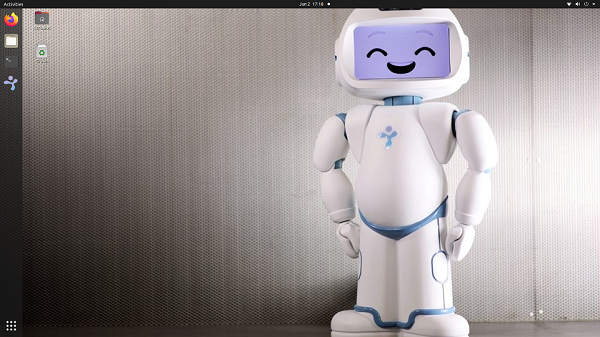 To power off the QTrobot simply press the power button on the back of the QTrobot. This will turn off both QTRP and QTPC. Wait enough for QTrobot to turn off before unplugging it from power supply: a blue screen shows up immediately goes off.

Now you should be all settled and ready for coding. However, in most cases you need to have access to the internet. So let's follow the next section to connect your QTrobot to your home/office router and the Internet.

3. Connect QTrobot to a home network and Internet​

To have access to the internet from all machines (as it is demonstrated in the following diagram_, the Wi-Fi of QTRP should be connected to your home router. The internet from the home router, is shared to all other machines (including QTPC) via QTRP. The green arrows shows the direction and how internet shared between QTRP and QTPC. 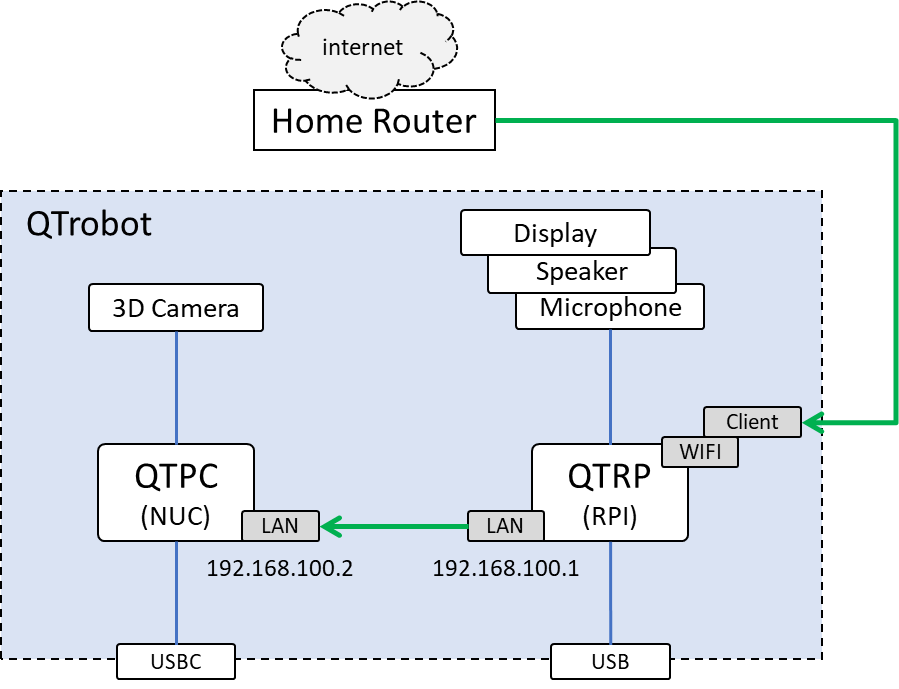 Therefore, you need to connect the QTRP to your home router's Wi-Fi. To do that do the following steps:

Next, restart the qt_wlan0_client service:

Step 3. Test and make it permanent​

After following the above steps, your QTrobot should be connected to your home/office network and have access to the Internet (i.e. you should be able to ping www.google.com for example).

You are all settled! QTRP gets internet connection from your router and will automatically share it with QTPC and any other devices connected to QTrobot Wi-FI hotspot.

For more informations about QTrobot's networking and to learn how to re-enable QTrobot's hotspot, please check Computation and networking.

4. Optional ways of working with QTrobot​

For this steps you will need ROS installed on your computer. If you don't have it please follow this installation instructions

Last step is to connect to the QTrobot Wi-Fi hotspot and test your ROS environment. One option is to list all ROS topics that are running on QTRobot:

or call some of the QTrobot ROS interfaces:

You will hear QTrobot say Hello.

IF you encounter any issue for calling rosservice from your laptop such as delayed response, just add the following line to the /etc/hosts file on your laptop:

Alternatively you can directly SSH to QTPC from your laptop to develop code on the QTrobot.

For some older version of QTrobot's you need to ssh with qtrobot user instead of developer (i.e. ssh qtrobot@192.168.100.1). For the password use qtrobot.

To ssh to QTPC, first connect your laptop to the QTrobot Wi-Fi hotspot and run the following command3. For the password use qtrobot.

Alternatively you can ssh to QTPC via QTRP with the same command.

Congratulation. You are all settled and ready to start programming with QTrobot. Now you can follow plenty of exciting Tutorials.