In the following sections you will find user manual of the QTrobot.

To power the robot on, simply connect the robot's power supply1.This triggers the power on process and your robot becomes ready less than a minute. After powering on, you can see the robot face is on and the motors are in their home position. If the robot is off and it is connected to the power supply2 simply push the power button to turn on the robot.

To power off the robot, simply press the power button when it is on. You can see that the robot motors move to the parking position and the robot display turns off in less than one minute. The Dim light at the power button indicates that it is safe to disconnect the power supply.

Avoid turning off the robot by cutting the power supply. This may damage your product.

Methods to power off the QTrobot

Apart from using the power button, you can power off the robot in different ways:

QTrobot comes with integrated WIFI interfaces. One of them provide the hotspot to remotely connect to the robot and the other one can be used to connect the robot to public WIF and internet. From your device/PC/tablet, just look for the robot WIFI hotspot SSID and connect to it. The hotspot name is your robot name (e.g. QT100).

3. Connect to QTrobot via ssh

After connecting to the robot WIFI hotspot, open a terminal from your PC and SSH to the robot using 'qtrobot' as hostname or using IP 192.168.100.13.

There are two ways to SSH into QTPC:

QTrobot has two web-based control panels one for QTROBOT and the other for QTPCP. These panels facilitate robot configuration such as connecting to the internet or to enable/disable robot startup scripts (see section Robot Autostart Scripts). You can connect separately to each control panel using their corresponding IPs. To connect to the QTROBOT or QTPC web control panel, after connecting to the robot WIFI hotspot:

5. Connecting to a Home Network and Internet

Do not use the QTROBOT WIFI to connect to a network. Instead use WIFI from QTPC!

Connecting to the Internet from Terminal

Open a terminal and SSH to QTPC and use 'nmtui' tool:

Connecting to the Internet from Control panel

Connect to the QTPC control panel and navigate to "Configure WIFI". Then simply follow the instructions.

Where are they located?

Both sets are located under ~/robot/autostart folder.

How they are executed at startup time? 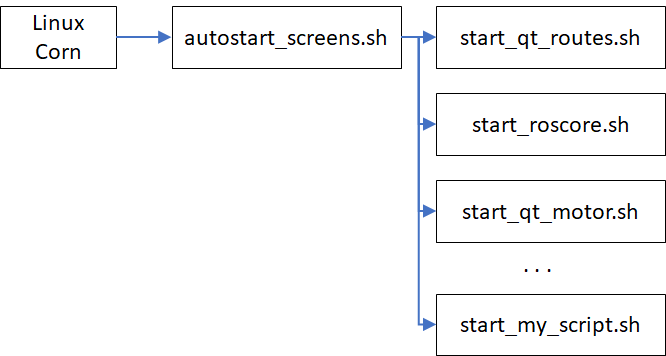 To add your own script (e.g. start_my_script.sh) you can simply add the following line to the autostart_screens.sh:

You can access them via terminal of NUC/RPI or via QTrobot web interface for enable/disable them:

What are the main autostart scripts?

As I explained above, there are some important scripts which prepare the robot network, ROS environment and launch the motor controller and other robot interfaces. All of these scripts are running on RPI and are necessary for functionality of QTrobot.

Here are the main startup scripts on RPI:

Here are the main startup scripts on NUC:

The NUC pc is most convenient place to develop code and run your own autostart scripts and apps. Most of the default scripts are simply running the QTrobot open source demos and examples and can be safely disabled and/or modified. There is nothing especial running by autostart scripts on NUC except: - start_qt_nuitrack_app.sh: which run Nuitrack skeleton tracking and camera interfaces.
- start_qt_webconfing.sh: launch QTrobot web config interface on NUC

All programs/ROS nodes which are run by QTrobot autostart scripts redirect their standard output (info/war/error messages) to their corresponding log file. These log files can be found under ~/robot/autostart/logs folder.

Your robot has a standard Ubuntu-based PC. You can use QTPC in the same way you use a standard desktop. That greatly facilitates and accelerates your development cycle as you have a full-featured desktop directly with your QTrobot. To do that:

You may need to connect the HDMI cable before powering up the robot to make QTPC aware of any external display.

8. Working on your PC

The following steps guide you through the installation of ROS Kinetic. For the complete installation guide of ROS see Install ROS

Please notice that QTrobot can be used with other versions of ROS such as Lunar and Melodic.

You need to configure your Ubuntu repositories to allow "restricted" "universe" and "multiverse". You can check Ubuntu documentation for doing this.

Setup your computer to accept software from packages.ros.org.

Now you can update and install ros-kinetic-desktop-full

First you need to clone our github Software repository. You can do that with this command:

After that go in the folder and copy the content of the headers folder to your Catkin devel folder.

Now you can access all QTrobot ROS services and messages from your PC.

The following steps guide you through the configuration of your ROS environment for QTrobot.

You need to edit your ~/.bash_aliases and add following lines. Change ROS_IP to your PC IP.

Which is my IP address ? To get your IP address, First you need to connect to the QTrobot WiFi hotspot. Then open a terminal on your PC and run the following command:

To apply this configuration you can open a new terminal or run this command:

Last step is to connect to the QTrobot WiFi hotspot and test your ROS environment.

To test your environment you can list all rostopics from QTrobot. You can do that with running this command.

Now you can start having fun.

You can access each robot's functionality via its publish/subscribe or service/client interfaces. For example, to use the robot 'Speech' functionality from terminal using ROS publisher, you can try:

or by using ROS service call: or from a python script: